Since the fall of the iron curtain, tourists worldwide have streamed in to Prague to view lovely medieval edifices, drink pilsner, and appreciate Art Nouveau and Cubism.

The historical political center of the extinct Kingdom of Bohemia lies in Prague Castle, which dates to the ninth century. At the center of the castle, the most tourist-packed site on my six-week trip, is St. Vitus Cathedral with all its gothic splendor.

He’s got the Saint Vitus Dance 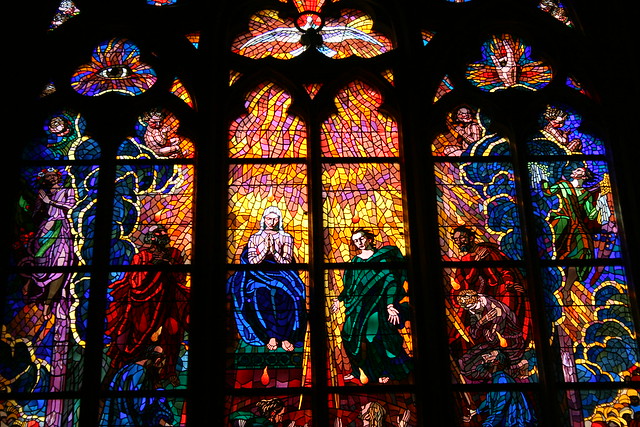 The castle stands on top of a hill west of the Vltava and the Charles Bridge connects both sides of the city. The bridge was finished in 1402 and is lined with 30 statues of saints. A museum about the bridge occupies the basement of a building at the eastern end. 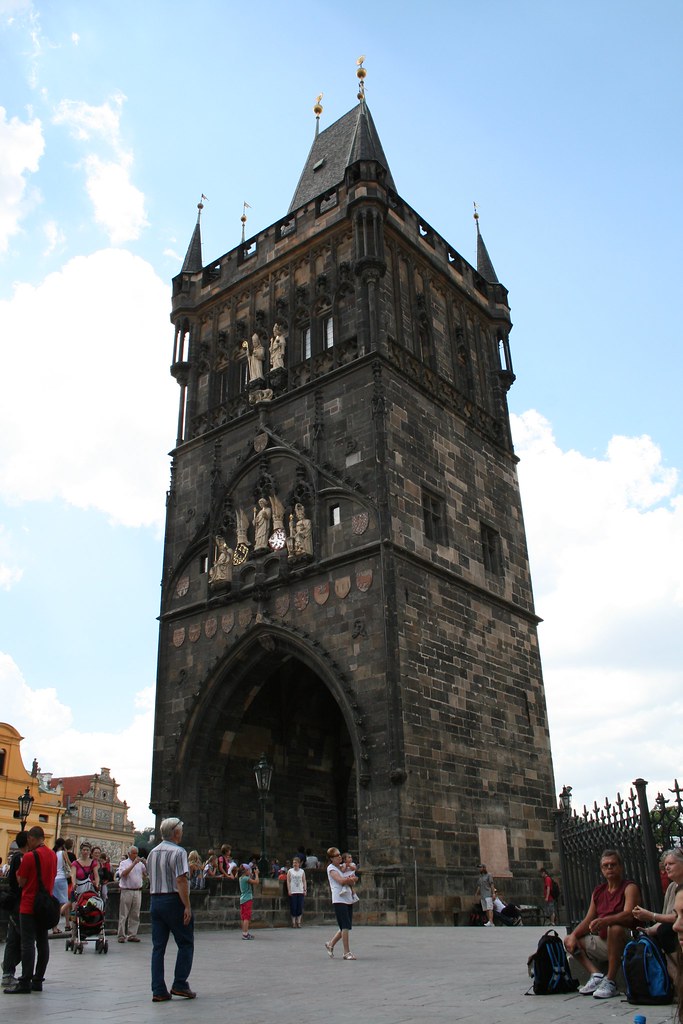 Everyone wandering east across the bridge inevitably ends up at Old Town Square (Staroměstské náměstí), which contains churches, hoards of tourists, a lovely floor, and the Old Town Hall 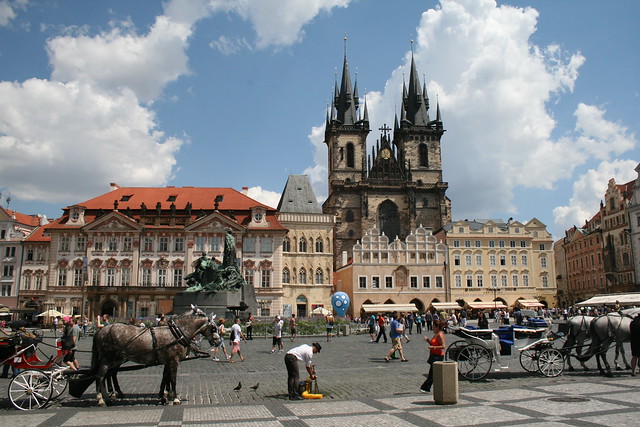 In 1410, clockmaker Mikuláš of Kadaň and astronomer Jan Šindel mounted this clock to the side of Old Town Hall. Every hour four allegorical statues bob and rotate beside the clock, much to the amusement of the tourists assembled below.

What time is it? Let me pull out my 500-page astronomical clock manual and then I’ll tell you.

Not everything charming in Prague was created over half a millennium ago. A century ago Art Nouveau took Prague by storm, particularly with the construction of the Municipal House and the publication of Alphonse Mucha‘s slavic beauties. 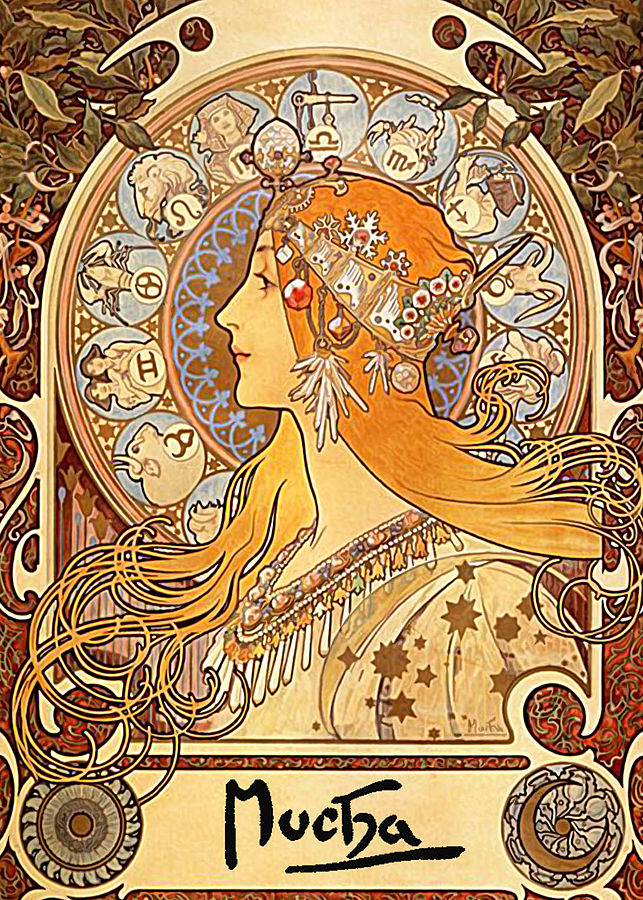 Since the 1980s, Czechs have paid homage to the slain John Lennon at a makeshift graffiti shrine. Pilgrims regularly add and repaint parts of the wall, leaving the previous generations’ work buried under layers of graffiti nostalgia.

No part of the world is safe from Frank Gehry. Completed in 1996, Gehry’s Dancing House waltzes beside the Vltava and contains 99 uniquely sized windows.

Somebody paid Frank Gehry for this.

Český Krumlov lies 100 miles south of Prague and is the country’s second most popular tourist destination. The town of 14,000 people centers around a well-preserved medieval castle, finished in 1240 and expanded in the intervening centuries. 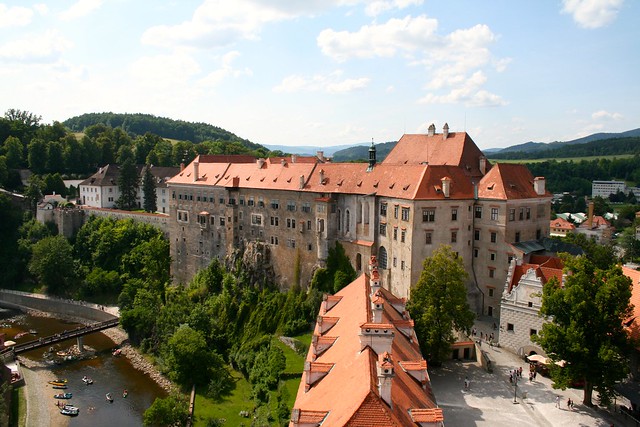 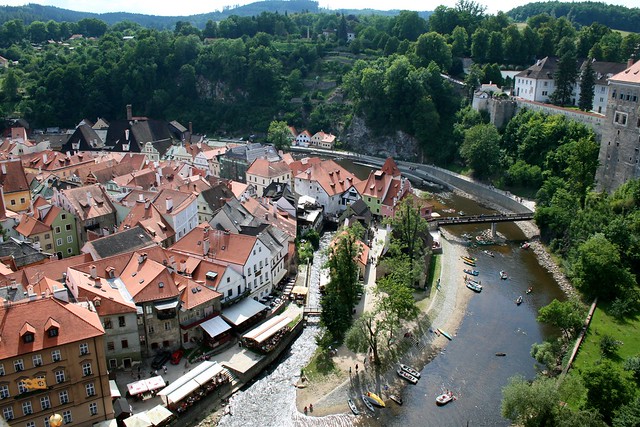 The castle sits atop two hills. An elaborate bridge across the stream valley connects the two halves. One can only imagine the expense of constructing this connection so nobles wouldn’t have to suffer the weather.

They should have used ziplines.

Three hours is enough to tour the castle and town. Energetic visitors can hike into the Blanský Les Nature Reserve and up to top of Kleť for splendid views of Bohemia.